The Right to Manufacture in America Act 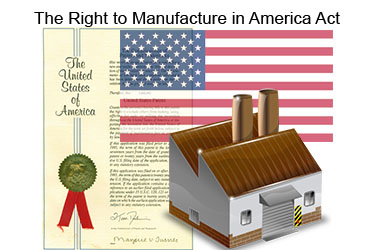 "The Right to Manufacture in America Act"
Outline for new Legislation in Congress:

1. Patent Law Reform
2. Coordination and information sharing between USPTO, CPB and OSHA
3. Documentation requirements required to achieve "Made in USA" certification
4. The Right to Manufacture in America.

What is a Patent?

" A patent is a set of exclusive rights granted by a sovereign state to an inventor or assignee for a limited period of time in exchange for detailed public disclosure of an invention. An invention is a solution to a specific technological problem and is a product or a process." - https://en.wikipedia.org/wiki/Patent

Most innovations and inventions that have been granted U.S. Patent protection in recent years have never been manufactured in the United States, with the exception of a handful of prototypes / proofs of concept, specifically made to serve as models to guide mass production in overseas factories, mainly in Asia.

This kind of "innovation and invention" that is occurring every day in America is NOT sustainable. Surely the inventors and patent holders and their agents profit handsomely from their invention, as do a limited number of large retailers like Amazon and Walmart.

However, American manufactures who are the traditional creators of well paying and sustainable jobs are closing down every day in this nation. Many multinational corporation who do have manufacturing operations in the United States are closing those factories in the U.S. and and offshoring those operations to other countries.

Therefore I propose the following style of legislation / rule changes:

1. U.S. Patents will still provide all the protections that they currently do, so long as it can be proven and documented that the product is manufactured within the 50 United States, Puerto Rico, and Washington DC.

2. The burden of proof that the product is manufactured in the USA rests with the Patent holder, and will be documented and verified by both CBP and OSHA. (explained below) The USPTO website / search-able patent database will be expanded to include certification of "Made in America status" for all products covered by U.S. Patent protection.

4. The patent holder (on new patents) has a grace period of 1 year from the date the patent is issued, to have the product 100% manufactured* within the United States to be fully covered by patent protection. Existing patent holders would have 1 year from the enactment of this legislation to shift their manufacturing to the United States to maintain their patent protection.

5. Changes in (CBP) US Customs reporting requirements for importers of goods that are protected by U.S. Patents, will be enacted. Goods imported into the United Sates that are covered by U.S. Patents be will be reported as such, and this information regarding the number of units imported, country of manufacture, and applicable U.S. Patent number, will be integrated onto the USPTO website so that persons searching the US Patent database by patent number will have access to this information and be instantly able to see the product's "Made in America Certification".

6. In addition to using using CBP to determine if a patented product was manufactured overseas and imported into the United States; "Made in America " status / certification for Patent holders will be subject to simple documentation requirements to prove the existence and continued operation of their U.S. Based manufacturing facilities. Common documents such as property deeds / bills of sale and/or leases for manufacturing facilities, machinery, tools and raw materials etc. as well as W2 tax forms for employees engaged in manufacturing activities will be submitted to OSHA each year as part of this certification process.

7. OSHA will be tasked to periodically, physically inspect the patent holder's manufacturing facilities and tangibly verify through "direct sight", that the product is indeed being manufactured at the facility as claimed. This inspection report will also be included in the "Made in the USA" certification accessible from the USPTO website / search-able database.

8. If a patent holder lets their "Made in the USA" certification lapse for any period of time, no matter how brief during the life of the patent, it will be noted on the USPTO website, and their patent will be subject to the "Right To Manufacture in America" clause of this legislation.